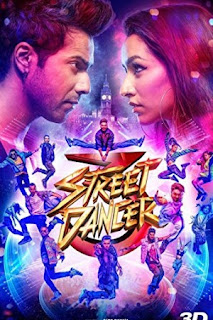 Street Dancer 3D is a 2020 Indian Hindi-language dance film directed by Remo D' Souza. It is produced by Bhushan Kumar, Krishan Kumar and Lizelle D'Souza under the banners T-Series and Remo D'Souza Entertainment. The film stars Varun Dhawan, Shraddha Kapoor, Prabhu Deva and Nora Fatehi. Its music is composed by Sachin–Jigar, Tanishk Bagchi, Badshah, and Guru Randhawa, and released under the banner T-Series. The story explores a dance competition between some Indian and Pakistani dancers.

Originally planned as a sequel to Disney's ABCD 2 (2015), the film was taken off the title due to Disney's exit from Indian film production, and was instead renamed to its current title after Bhushan Kumar took over as producer. Filming commenced in February 2019 in Punjab, later moved to London and was wrapped up in July 2019. It was theatrically released in India on 24 January 2020.